A Complete Tutorial to Susy

Susy is a plugin to Compass that allows you to create customizable grid frameworks easily. It makes responsive design extremely easy by removing the need to manually calculate widths.

If you need to create repsonsive websites do not want to constrain your design with available frameworks out in the open, Susy might be the perfect answer.

This is the first of a two part tutorial that covers the basics of Susy.

In this tutorial, we are going to install Susy, set up Susy defaults and understand how to create the 10-column complex nested grid AG test found on the susy website.

Susy 2 is now released, which makes this tutorial obsolete. Head over here to find the latest article on Susy 2 instead.

This tutorial assumes that you already have Sass and Compass installed. If not, I suggest you check out some awesome video tutorials at LevelUpTuts for Sass and Compass.

Once you have Sass and Compass installed, go ahead and install Susy from the command line:

Important Note: Susy has been upgraded to Susy 2, and a lot of the configurations is changed. If you have any errors running Susy, I would recommended you to uninstall all versions of Sass, Compass and Susy, and reinstall them altogether. The most important thing here is that sass and compass needs to upgrade if you are using old versions (I have no clue how to update so I just reinstalled everything)

The process to use Susy in a project is to add a line of code in the config.rb found in the compass.

Now, we can get into the very basics of using Susy.

I’ll also recommend using border boxes to help you with creating layouts. Susy has a built-in mixin for border-box sizing. Read on about border-box over at CSS Tricks if have no idea what it is.

Also, the susy grid background helps alot when trying to understand how columns are placed.

With this, we are now ready to tackle the 10 column AG test.

Setting Up The AG Grid Test 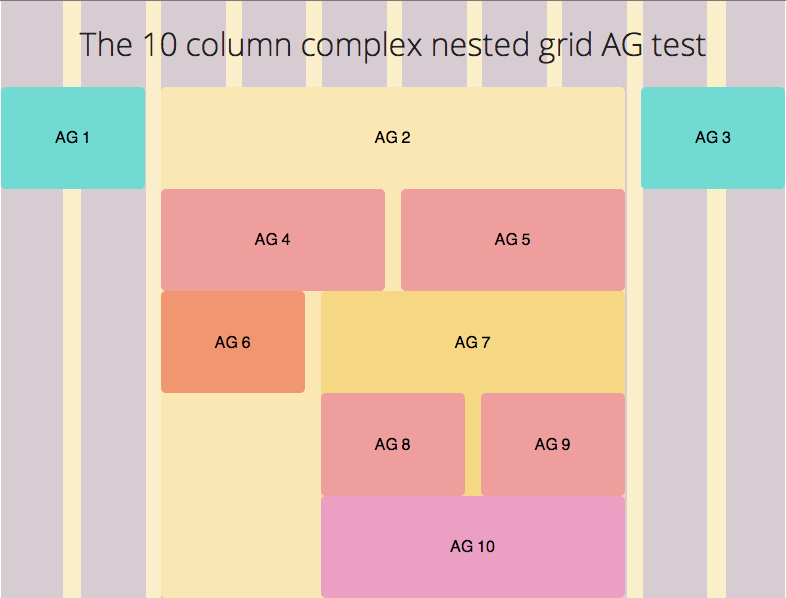 The HTML for the grid test is as follows.

Simply speaking, whenever something is found within another div, you should nest it within the previous div.

We’re going give each ag a color like the one on Susy’s main webpage.

Before diving into writing susy mixins, I hope you wont mind if I explained how they work.

Container establishes the grid containing element for the webpage. Given our html, the container mixin will be applied to the container class. This tells Susy where to start all the calculations from.

If were are to use Susy with responsive design, we have to pass some arguments into container. This will be elaborated on in part 2 of the tutorial.

The Span Column mixin is probably the one used most while using Susy. It allows you to align an element to the grid you would like defined.

The span column mixin takes a minimum of 1 argument and has the potential to accept a few more to customize to your needs.

The most important arguments to be included here in span-columns are $columns, omega and $context. The rest of the explanation can be viewed on the Susy Reference page.

Since we’re clear of the two basic mixins used, we can start applying them to create the grid.

We must also make the container clear its childrens since Susy makes use of floats to align our grids. For simplicity, I’m using overflow hidden as the self clearing method here. Other methods can be found on Chris Coyier’s page.

Lets start applying susy span column mixins to the rest of our grids. Taking the image as a reference, we count that ag1 takes up 2 columns, ag2 takes up 6 columns and ag3 takes up the final two columns.

This CSS output Susy has created for us.

Susy takes into account the container’s width at 49rem (or 784px) and proceeds to convert all our calculations into percentages. Its alot simpler to work with numbers like 2 and 6 instead of absolute percentages!

Although this doesn’t seem like much right now, you will see that its extremely awesome when responsive design comes into play in the next tutorial.

Let’s proceed to complete the rest of the grids that are within AG 2.

Here, we have to be very careful with the $context because $context defaults to the $total-columns, which was declared right at the top of our Sass file.

If left untouched, Susy will use 10 columns to calculate the width of everything within AG 2.

AG 2 consists of 6 columns and we want our items within the grid to have a context of 6 columns as well. In this case, we have to specify the context manually with the number 6.

The rest of the mixins can be used in the same manner as above. 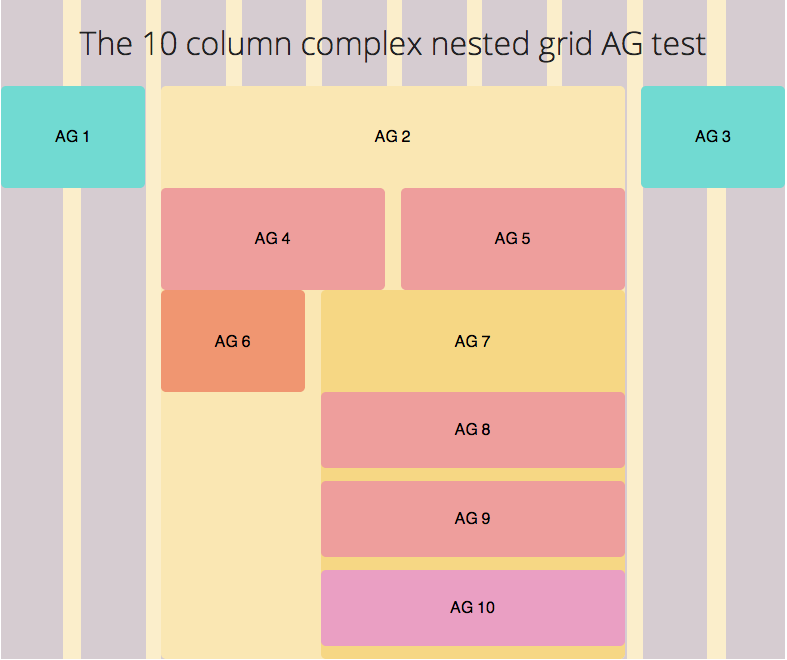 What’s left now is everything within the AG 7 column.

Repeat the process with everything you have done with the elements in AG 2. The context within AG 7 is 4 columns.

Feel free to grab the source code and view the demo:

Wrapping Up the First Part

I hope this quick tutorial has given you the opportunity to familiarize yourself with Susy and to understand how span columns and containers are used.

In the next part of the tutorial next week, we will cover the use of Susy with responsonsive designs, altering the AG grid at various sizes. We will also look into using some of Susy’s helper mixins that provides additional padding or magin to really make our design fully customized.

If you enjoyed this article, please tell a friend about it! Share it on Twitter. If you spot a typo, I’d appreciate if you can correct it on GitHub. Thank you!

🤗
Woohoo! You’re in!
Now, hold on while I redirect you.